The most exclusive restaurants in Barcelona

The restaurant offer in the Ciudad Condal (or “Count City” as the locals like to call it) is gigantic, simply choosing where to go for a meal can become an impossible mission. Among the wide range of possibilities, Barcelona stands out thanks to the numerous luxury restaurants and Michelin star recipients. A minimum of 24 restaurants have been awarded this prestigious culinary distinction at least once, although several other exclusive establishments are deserving of it too thanks to their quality, originality, and innovation.

Among the most exclusive restaurants to confer prestige to the Catalonian cuisine, we find that Cinc Sentits – located just several meters from Paseo de Gracia in the Eixample area – is certainly a highlight. This restaurant offers tasting menus, small portions of dishes served by the young chef Jordi Artal. His signature cuisine, awarded with a Michelin star, grants an opportunity for guests to taste the best that modern Catalonian cuisine has to offer.

On the same street, we also find the fashionable and exclusive Osmosis restaurant. This restaurant, headed by the young Catalonian chef Frederic Fernández, offers a modern Catalonian tasting menu that is full of creativity and among the best in the area. This establishment sports an excellent and inviting decoration design, also featuring small private rooms – perfect for business or family dinners.

Very close, between Rambla Cataluña and Balmes, another exclusive restaurant to taste the most delicious high cuisine can be found: the Windsor. This restaurant is located in a beautiful modernist building, offering an elegant and modern atmosphere filled with natural light. Its modern Catalonian cuisine is handed by chef Carlos Alconchel, who creates his dishes using the best seasonal products in the region.

Next to Plaza Cataluña we find the Caelis restaurant, emblematic of the Palace Hotel in Barcelona. Its exclusive and intimate atmosphere creates the perfect mix with the creative Mediterranean cuisine served here. Caelis offers French chef Romain Fornell’s reinvention of classic dishes, the only chef to be awarded a Michelin star both in Spain and in his own country. 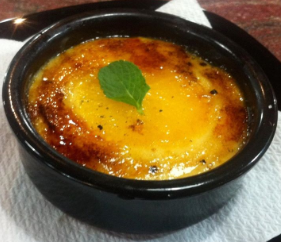 Now we move to the St. Gervasi-Bonanova area, where we find the ABaC restaurant. This establishment is the proud awardee of two Michelin stars, and was also nominated as best restaurant in Cataluña in 2011. Its youthful team of professionals, led by the award-winning chef Jordi Cruz, deploys a creative cuisine of great technique and innovation amid a tranquil, elegant and sophisticated environment.

In the very midst of the Olympic Village, the Arts Hotel is home to one of the best restaurants in the city, run by the famous chef Paco Pérez. Enoteca, holding a single Michelin star, offers a modern Mediterranean cuisine with the right touch of traditional sensibilities. Its special dishes include shellfish and fish, in addition to the impressive wine cellar holding more than 350 wine options, all perfect to drink with any of the dishes served.

Lastly, we present the Moments restaurant, located in the opulent Mandarin Oriental Hotel at Paseo de Gracia. This restaurant – recipient of a Michelin star – is the supreme model of luxury and the avant-garde, offering a menu full of neotraditional Catalonian cuisine dishes. The exquisite food served here carries Carme Ruscalleda’s seal, widely recognized as the only chef to have received the Michelin star a whooping six times.