There are other ways to discover Barcelona aside from the classic routes through the most famous monuments. Routes especially adapted to even the most demanding tourists who are looking to meet the lesser-known face of the city. For the more curious visitors, there are theme tours organized throughout Barcelona in which to discover the hidden secrets this historical city holds.

Myth and legends night tours will allow you to penetrate the most mysterious and enigmatic corners, streets and plazas in the Gothic and Born neighborhoods. The night magic in some of the oldest parts of the city hides fascinating legends about warlocks, nuns, wretched knights, and brutally punished kings. This tour also showcases the curious stories and symbols surrounding the city’s streets, and the lesser known myths about Roman festivals, Christian penances, and even Hercules’ great deeds 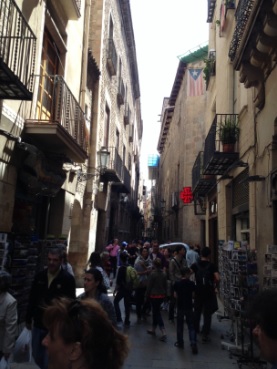 This is of the most popular thematic tours in Barcelona and offers an opportunity to learn about the Spanish Civil War. It will take you on a route through Spanish history, discovering the most emblematic places of the conflict, such as Plaza Sant Jaume, the Gothic neighborhood, the Raval, and the Eixample, reliving the day to day lives of all those who suffered from lootings, shootouts, and bombings back in the late 1930s.

Another interesting and original tour will allow you to visit all the spots that have served as filming locations for multiple films. During the tour you will discover filming locations for several of the most iconic scenes from Woody Allen’s “Vicky, Cristina, Barcelona,” the exact place where Fernando Trueba filmed “The Shangai Spell,” or Tom Tykwer filmed “Perfume: The Story of a Murderer.” You will also be able to visit the Raval neighborhood, which served as setting for Pedro Almodóvar’s exceptional “All About My Mother,” and for those who want more, the tour guides will recount and reveal all the secrets and anecdotes surrounding filming and the actors involved in these wonderful films.

Literature buffs will find several theme tours running through the most famous literary locales, like those found in books such as “The Shadow of the Wind” by Carlos Ruiz Zafón or “Cathedral of the Sea” by Ildefonso Falcones.

In the “The Shadow of the Wind” tour you will follow in the footsteps of the book’s characters, going through Santa Ana street, Baixada de la Llibreteria and the Montcada street. You will also visit essential places from the novel like the famous Els Quatre Gats Coffee Shop, the beautiful Santa María del Mar Church, and the Libros Olvidados Cementery, recalling the main character’s adventures at every step.

On the other hand, the “Cathedral of the Sea” tour goes through the main locations in the novel, like the Santa María del Mar Church, the Born neighborhood, and the Collserola mountain. In addition, the route goes through the old Jewish part of the city and will easily transport you into the plot of the novel.

All these tours are available in Spanish and English, most of them last for around two and a half hours, and are led by experienced guides who narrate interesting stories and anecdotes. Without a question, these are highly recommended tours for those in love with the obscure history of film and literature.