Parks and Gardens of Barcelona

Barcelona is a touristic metropolis hosting innumerable spots of great appeal. But, unlike other big cities, Ciudad Condal can also boast to having numerous parks and gardens spread throughout. These green spaces are ideal to remove yourself from the city’s stress for several hours, and also to enjoy some time with your dog, play with your kids, ride your bike or even have a picnic. Most of these parks are open to the public from 10 a.m. to 8 or 11 p.m. This depends on the specific park and time of the year, making it useful to check the operating hours signs at the entrance. Among the several parks to be found in Barcelona, the following stand out due to their beauty and uniqueness:

– Güell Park: This is the amazing park designed by modernist architect Antoni Gaudí. Visitors, in addition to the numerous animal figures, modern and geometric sculptures, will also be able to experience amazing views of the entire city from a privileged natural environment. The whole park is erected around a serpentine bank 110 meters (330 feet) long, working as its central point. Gaudí’s sculptures, inspired by nature, blend in perfectly with the winding roads and wooded areas. 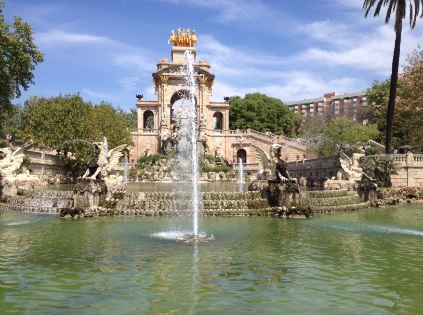 – Ciudadela Park: This wonderful park, located in the Ciutat Vella district, was built in 1888 to host the World’s Fair (“Exposición Universal”) and has become one of the main urban open spaces in the city. The Ciudadela Park is among the most emblematic and visited parks in Barcelona. It features big garden areas, a lake with rowboats, several monuments and fountains, a greenhouse, and even houses the Barcelona Zoo. Inside its more than 17 hectares (42-acre) of land, visitors will be able to enjoy the sunlit grass, listen to live music concerts, or take a rowboat into the lake.

– Laberinto de Horta Park: This is the oldest garden in the city, found in the Horta-Guinardó district. The most popular part of the park is the original cypress labyrinth, bestowing the park its name and whose magnificent beauty was captured by movies such as Perfume: The Story of a Murderer. In addition, the park counts with a romantic canal, big lakes with fish and swans, nice neoclassic fountains, and a big camellia plantation. The Laberinto de Horta Park is relatively quiet and unfrequented, perfect to relax and escape the city’s stress.

– Palacio Real de Pedralbes Gardens: Another of the most important gardens in the city is found in the Palacio Real de Pedralbes, located near the Les Corts district. Once the Royal Family’s residence when visiting the city, it now houses the Pottery Museum (Museo de la Cerámica) and the Decorative Arts Museum (Museo de Artes Decorativas). When traversing the winding roads of the garden, you should stop at the Hercules Fountain, the unique bamboo forest, several small waterfalls, and the various works of Antonio Gaudí.