If there is one thing Barcelona can boast about, is having an exceptional public transit system. Thanks to the numerous lines of subway, transit bus, tram, and Rodalies, you will be able to get anywhere in the city and nearby towns anytime during the day without complications. The different public transport options available in the city are:

– Subway: Without any doubt, one of the best ways to move around the city. It reaches all areas of interest, and does it in a quick, comfortable, and economical way to boot. The subway network is composed by 11 lines and 164 stations, and operates Sunday to Thursday from 5 a.m. to 12 a.m., and until 2 a.m. on Fridays. On Saturdays and certain public holidays, the subway system remains functional the 24 hours of the day.

– Transit bus: Barcelona counts with more than a thousand units moving through 80 different routes that cover the entire city. Most bus services start at 4:25 a.m. and stop at 11 p.m., though the timetable and bus frequencies vary for each route and day of the week. Barcelona also has a Nit Bus, a night bus service departing from Plaza Cataluña and operative from 10:40 p.m. to 6 a.m.

– Rodalies: In Barcelona the Rodalies (or “Cercanías”) can be taken to move through the city or to reach other towns, including Tarragona and Lleida. Its operating hours are similar to the subway, the only difference being those lines connecting Barcelona to other towns, as they have their own separate timetables.

– Tram: The tram network has 6 lines, though its only 3 of those that move through the city’s downtown. The network operates daily from 5 a.m. to 12:15 a.m., except on Fridays and Saturdays when it closes down at 3 a.m. Tram routes are fairly short and none of them will take you to the more emblematic spots in the city, so its actual usefulness to tourists is rather reduced.

Though some tickets can be somewhat expensive, getting around Barcelona can become quite cheap if you get a fitting season ticket (“abono”). Choosing between tickets and season tickets will depend on how much you plan on using the public transport system. You must take into account that both tickets can only be used by one individual, and must be kept on your person during the entire trip given that they may be checked by a transport official or be needed to exit the station.

Single-use tickets can only be used for a single trip, with no connections. In contrast, season tickets offer an integral fare, allowing passengers to use various transport options with the same ticket for 1h and 15min. You can get season tickets by number of trips, number of days, months, or even three-month periods. The most commonly used are the 10-trip and the 1-day passes. Another great option for tourists is to get the Hola BCN! Card, coming in versions of 2, 3, 4 or 5 days. With this card you will be able to enjoy unlimited trips during the valid days on subway, bus, Rodalies, and tram. 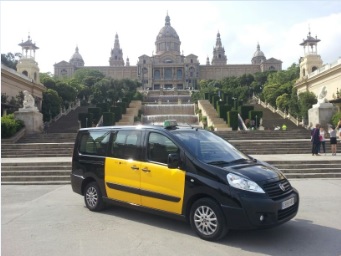 There are different ways to get all these different ticket options. Single-use tickets can be bought at the ticket windows and machines in the subway, in the buses, and in TMB (Metropolitan Transports of Barcelona) information booths. Season tickets for 1-day and 10-trips can be purchased at news-stands, and season tickets worth several days can also be acquired in the tourist offices.

– Taxi and transport from the airport: Barcelona has over 10000 taxis at service which can be distinguished by their yellow and black colour. The user can choose from a variety of companies and services, including one with vehicles adapted for wheelchairs. One of the most used services is the trip from the airport which can be booked directly from our site.