What to do in each area of Barcelona

Barcelona is a big city full of appeal and charm. Due to its size, it is almost impossible to really get to know it in just one visit. To find the best Barcelona has to offer aside from the most famous places, this page outlines the many points of interest to be found in each area and neighborhood, all well worth a visit.

What to see in Las Ramblas

Las Ramblas, without any doubts, is one of the city’s most visited and well known places. This street is always full tourists, street artists, and terraces, making it a lively place to take a walk or just enjoy the good weather. Stretching from Plaza Cataluña to the port, Las Ramblas features gift shops, flowers and plants shops, human statues, bars and restaurants. Reaching the end of the street, you will find the emblematic Mirador de Colón (“Columbus Observation Deck”).

What to see in the Gothic neighborhood

The oldest area is also the most beautiful, the Gothic neighborhood is found in the city’s downtown. Its narrow medieval streets hide numerous tourist attractions, such as the Catalonian gothic style Barcelona Cathedral, the Plaza de Sant Jaume hosting the City Council and Generalitat, and the medieval buildings found in Plaza del Rey, where the city’s History Museum is also located. In addition, its winding streets hide the remains of the old Jew neighborhood and one of the most important commercial areas in Portal de L’Angel Street. 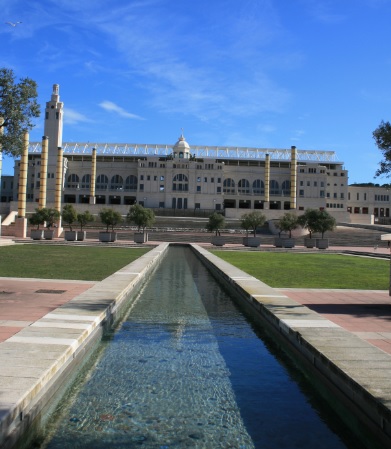 What to see in Montjuïc

In the Montjuïc area, an old military outpost, there is a great variety of touristic hotspots to be found. The magnificent Magic Fountain is certainly a stand out, each night displaying a show of water, light and music that lures tourists in droves. Right behind it, you will see the Royal Palace, a beautiful building that hosts the Cataluña National Art Museum, which has one of the most interesting Romanic art displays. You will also find the Pueblo Español (or “Spanish Town”), a village founded in 1929 that represents the typical architectonic styles found in different points across Spain and where you will find interesting arts & crafts workshops and shops. Furthermore, at the top of the mountain you will be able to visit the Montjüic Castle, a military fortress which allows for a magnificent view of the city.

What to see in the Eixample

Set apart by its characteristic grid-like street arrangement, Eixample has become the biggest place to visit if you want to go shopping, enjoy varied bars and restaurants, and sightsee some of Gaudí’s most modern architecture, such as the Sagrada Familia Church, Casa Milá or Casa Batlló. 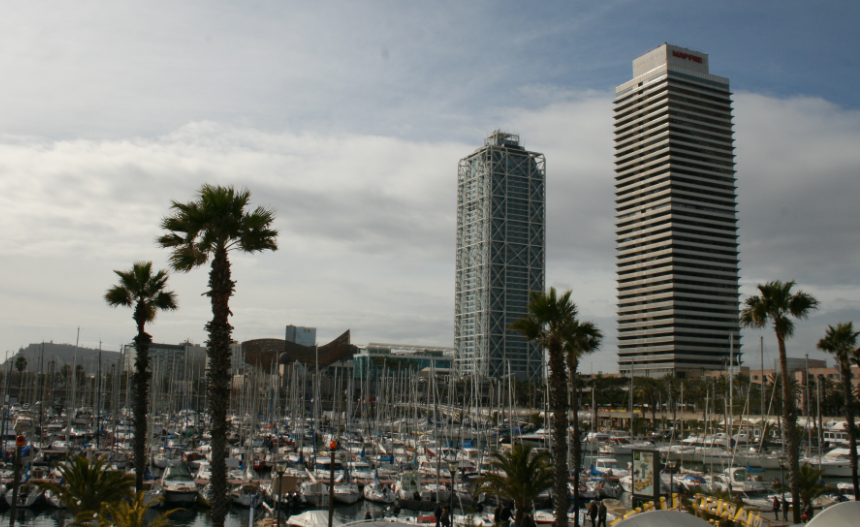 What to see in Puerto Olímpico

Located right in front of the Olympic village, between Somorrostro beach and Nova Icària beach, you will find the Olímpico Port. This attractive sports port has become one of the most popular places in the whole Mediterranean coast. Full of terraces, restaurants, night clubs and pubs, it is one of the main leisure and tourism points in the city, and also the best area to have a drink and take a walk by the sea.

What to see in La Barceloneta

This is one the city’s most charismatic and popular neighborhoods. While found in the city’s downtown, it still maintains a quiet and familiar marine atmosphere. The dark façades and the narrow streets mix with the more modern areas, giving the neighborhood a special charm. Among the main attractions we find its beaches: La Barceloneta, Somorrostro, Sant Sebastià and Sant Miquel. In addition to its coast, the best of this neighborhood is found in the magical and narrow alleyways, the churches, and the old buildings. Ordering fresh fish in its many restaurants, visiting the Catalonian History Museum or riding the cable car to the Miramar looking point, are some of its other great attractions.