Roman and Medieval routes in Barcelona

Barcelona, one of the most modern and cosmopolitan cities in Europe, hides centuries of mysterious and alluring history in its Old Town. The Roman and Medieval theme routes offer a spectacular run through the city’s history, from Barcino’s foundation in the 1st century BC to the times of the Catalonia-Aragon Crown during the Middle Ages. These routes showcase the magnificent architectonic and cultural heritage that still remains in Barcelona’s streets, and will allow you to unravel part of its history. You will visit palaces, civilian buildings, churches, and emperors’ tombs, all complemented with exciting tales of witches, jousting matches between knights and the horrific cruelty perpetrated during the Spanish Inquisition.

Vestiges from Roman Barcelona are spread throughout the entire Gothic neighborhood. This route moves along the wall, entrance gates and watch towers belonging to the roman city of Barcino, located at Plaza Nova and Plaza Ramón Berenguer. Right next to Plaza Nova, you will also find the Casa del Arcediano, with beautiful balconies, façades and period ornamentations. A bit further away, inside Plaza de la Vila de Madrid, you will find the Roman necropolis, with more than 70 tombs dating back to the 2nd and 3rd century. As a final touch, you should stop by the four imposing columns that once belonged to the Temple of Augustus, now found inside a small medieval courtyard at Paraíso street, close by Plaza Sant Jaume. 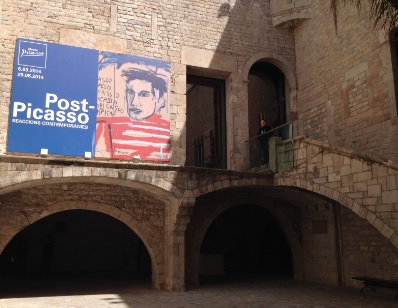 Remains from Medieval Barcelona are found all throughout the Ciutat Vella district, west from the Gothic neighborhood. One of the most interesting spots is Plaza del Rey, hosting the Palau del Lugarteniente and the magnificent Palau Reial Major, offering a scenic view. In the terrace, you will also find the History Museum of Barcelona (Museo de Historia de Barcelona), the perfect place to get acquainted with the city’s past. Montcada street holds another medieval standpoint thanks to its various palaces, and it is where you will also find the Picasso Museum, hosting more than 3500 artworks by the famous painter.

The Medieval route is rounded out with the numerous churches found in the area. Standouts include the gothic Santa María del Pi Church located at Plaza del Pi, the Santa María del Mar Cathedral, unique in its distilled Catalonian gothic style, and the San Pere de Les Puelles Romanic monastery. Other buildings of interest involve the old Hospital de la Santa Creu, currently hosting the Library of Cataluña, and the museum and monastery Santa María de Pedralbes, where you will be able to learn about the Clarisas Order of nuns.